You also get to make your own short film using World-Class Equipment and Facilities at Digital Film Academy, New York. 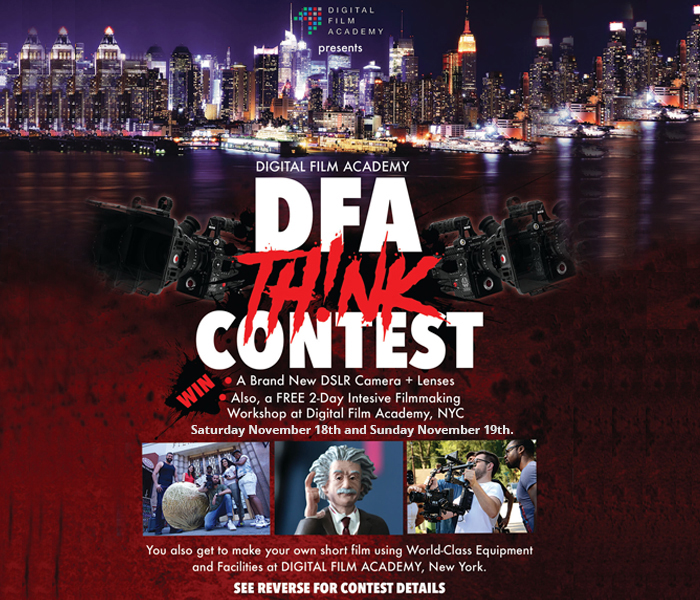 Shoot a film no more than 60 seconds on the topic ‘Think – Perception, the New Reality’. The medium of filming should be digital i.e. Cell Phone, DSLR Cameras, Digital Film, or any other pro/consumer Digital Camera. The film must be edited with music and sound (if there is dialogue) to the best ability of the filmmaker.

Post your film on Instagram and Twitter Only before 12 midnight October 27th, 2017. Tag @digitalfilmacademy on Instagram and @DFANYC on Twitter. You must use the hashtags #ThinkDFA #ThinkDFAContest to be eligible for selection. The top 10 films with the most Likes/Views on Instagram and Retweets plus likes on Twitter combined will automatically make the cut. The final 10 contestants will be selected by a team of faculty and film experts at Digital Film Academy.

Directors of the 20 selected entries will attend a 2-Day Intensive Hands-On Digital Filmmaking Workshop at DFA where they will be taught high level directing tips, lighting tricks, cinematography and rudiments of screenwriting.

Participants get to write, shoot, edit and screen their own short film. The best film overall wins the grand prize. All participants get a certificate of participation from Digital Film Academy.

The inaugural “The DFA Think Contest” was a big hit with several entries from young filmmakers across the Tristate area of which 8 filmmakers were selected as finalists to attend the Free 2-Day Intensive Filmmaking Workshop at Digital Film Academy in New York that took place on November 18th and 19th, 2017.

The day continued with a class in Cinematography where the finalists were properly introduced to the RED Digital Cinema camera, its functionalities, 3-point lighting, shot composition, scene coverage, and a whole lot more. Digital Film Academy president, Patrick DiRenna, personally taught the directing master class which opened the eyes of these young filmmakers to an entirely different and revolutionary approach to directing including working with actors, understanding emotional context and content, developing clarity as a director. This lesson culminated with a revolutionary and simple formula to eliminate complications in production.

Day One wrapped up with classes in Screenwriting and Producing where the filmmakers got the full breakdown of the 3-Act Structure in screenwriting, character development and how to get story ideas.

According to the President and Founder of Digital Film Academy, “We want technology to enable deeper, wiser and more forward thinking. Media technology specifically is playing a great role in human evolution and needs to be effective and meaningful.”
The 6 filmmakers in attendance were tasked with developing a story, writing it into a 2-page screenplay, delegating roles (crew), casting, shooting and editing the material.

Day Two, Sunday November 19th, all finalists came in very early and assembled in one of the computer rooms at Digital Film Academy. They discussed their story idea as a group, and wrote the screenplay. Justina Adorno was selected as the director of the project. They brought in their actors, and spent the greater part of the day filming with the Red Digital Cinema Camera and DFA Equipment in the DFA Facility. After filming, they proceeded to the editing room where, together, they edited the film and finally screened it for the instructors. The DFA instructors were very pleased with the piece while the students enjoyed the thrill of the challenge and the opportunity to work with expensive, industry standard equipment they never had access to before the DFA THINK CONTEST.

Nyack High School student, GRACE GRIFFIN, emerged as the overall winner with her short film PERCEPTION. She won the grand prize of a Canon EOS 70D and a Canon 18-55mm Lens. She said, “DFA has changed my life for the better. Thank you for a fantastic weekend and for opening me up to endless possibilities in the filmmaking world. It was unforgettable experience that I will treasure forever”. Each finalist received a certificate of participation from Digital Film Academy.

One of the finalists, Mia Diaz said, “I learnt more than I expected, met amazing, talented people and was able to share ideas in a great environment. You cannot get this kind of experience anywhere else”. Sylvester Maldonado said, “The DFA contest not only allowed us to create content under pressure and learn from our mistakes, but also taught an invaluable amount of knowledge for making films in just 2 days that I will take with me forever. The teachers are amazing people who still have fire in their eyes for the craft!” He went on to say, “Meeting and working with everyone else was such a delight and as the finalists, we are already talking about doing something together as a team”.

Justina Adorno, It’s been a long time since I walked into a room and left completely inspired and motivated. DFA did that for me during the two day workshop I was grateful to be selected for. I am so glad I stumbled upon the school and contest. The faculty students and alumni we so encouraging and straight forward with the tools and knowledge they had to offer. I felt right at home can’t wait to go back at the next opportunity I have! Thanks DFA for putting the light back into my eyes!

Patrick Direnna presented the prize and certificates to the winner and finalists. “We believe that discovering, encouraging and supporting filmmakers at a young age will not only have a great impact on the motion picture and digital media industry, but it also keeps these talented kids away from trouble and inspires hope. As a vocational school with a conservatory program, we don’t just educate and send graduates out to the streets like an assembly line. We are committed to the success of our students and the development of our community”.

® GI Bill® Is a registered trademark of the U.S. Department of Veterans Affairs (VA). More information about education benefits by VA is available at the official U.S. government website at www.benefits.va.gov/gibill