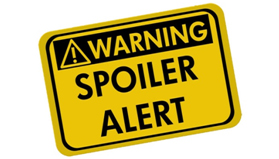 I saw Rosemary’s Baby as a kid and remembered being disappointed. The Satan makeup was cheesy and, overall, I declared it “not scary.” But a filmmaker friend raved about it so passionately that I decided to give it another shot, as an adult…

Quite simply, it’s one of the best movies I’ve ever seen.

In fact, I found it so powerful that I just sat in quietly after it ended and then spent the next couple of days reading articles about its deeper meanings.

The best horror movies are usually about “other issues.” The zombies really represent communism and so on… Rosemary’s Baby is widely thought to be about having one’s reproductive life controlled by creepy old men. 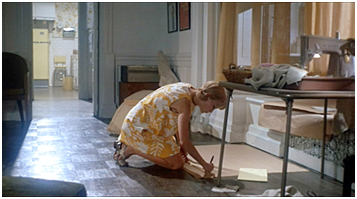 To sum up the plot, Rosemary and her husband, struggling actor Guy, move into an apartment building, the Bramford, with a shady past. Before long, a pair of annoyingly solicitous neighbors becomes an every-day part of their lives. Guy and the neighbors form a tight bond, Guy’s pathetic acting career takes a turn toward fame, and Rosemary is soon pregnant…

The film is sprinkled with little indications of what’s really going on throughout, but until the final chilling scene, nothing is ever really explained. As a screenwriter, I can tell you that a lot of the time scripts are rejected for being too subtle. Subtle doesn’t sell. Rosemary’s Baby, though, is an incredible example of a story that is SUPER SUBTLE – but which works!

We experience the movie from Rosemary’s point of view, and are kept as in the dark as she is. As she pieces things together, so do we. We completely believe her ‘conspiracy theory’ – yet, right up until the end, we also wonder if her suspicions aren’t actually the result of over-zealous pregnancy hormones. 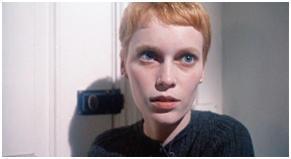 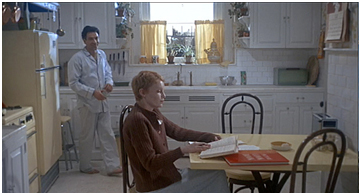 Only in the very last scene do we learn that Rosemary is 100% correct in suspecting a conspiracy. However, the witches’ coven in the Bramford is not out to sacrifice her baby as she thought. The baby is actually Satan’s son. Guy allowed Satan to impregnate Rosemary while she was drugged, in exchange for the coven’s work in helping his career.

What struck me about this film upon second viewing – apart from the incredible suspense-building – was how sad it is. While I think there may be a few different meanings in the story, I’d have to agree about the ‘reproductive control’ theory above… which, apart from being scary, is also heartbreaking.

Rosemary wants nothing more in the world than to have a baby. She doesn’t have any goals or aspirations other than raising a safe, healthy child. But in the end, she has zero control over anything about this child – including who its father is. She gives birth to Satan’s son – and, in a final moment many-times noted for how chilling it is, gives in to her maternal instincts and becomes chained to this Satanic offspring for life on the basis that, as the mother, she must care for it. (Hmmm…. maybe this is a film about the fear of becoming a parent?) The little “Jenny or Andy” she dreamed of her whole life is forever denied her. She doesn’t even get to pick the child’s name. The title, Rosemary’s Baby, is ironic. 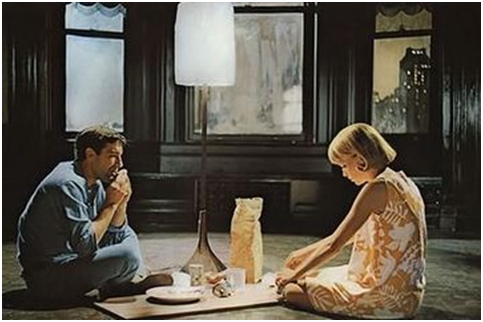 It’s also sad how no one cares for the increasingly isolated Rosemary (with the exception of one friend who is killed off when he uncovers the secret and tries to warn her,) not even her own husband. She truly is just a vessel, a means to an end, and this adds to the terror… while we identify with Rosemary as an actual person and can put ourselves in her shoes, we see how easy it is for a human being to be used as a commodity. It shows how something tragic can happen to anyone – a sensation that’s heightened all the more by how utterly commonplace Rosemary’s neighbors, who lead a Satanic coven, actually appear.

There is one more theory about the film that caught my attention, and which may explain why it’s so chilling to men and women alike. Rosemary is actually “America.” (Bear with me.) The film was made in the ’60s, a decade about love and peace. Rosemary, like the hopeful people of that time, is naive about what her future holds. Once it becomes inevitable that her beliefs have no place in the “real world,” she not only accepts the world as it is – she has to give up her ideals and become a part of it. 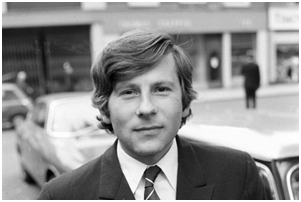 It’s chilling to note that writer/director Roman Polanksi’s pregnant wife, Sharon Tate, was herself murdered in a Satanic ritual by the Manson family, shortly after the release of Rosemary’s Baby. The event, dubbed one of the most significant of the 20th Century, came right at the end of the ’60s and, for many, marked the end of the peace/love era. It’s surrounded by conspiracy theories of its own…